Walter picks over what’s good and bad about this latest vintage. See his tasting notes on 127 regular bottles of 2015 Brunello di Montalcino. An assessment of Selezione bottlings follows tomorrow.

I am never one to immediately write up my assessment after a comprehensive tasting of any new vintage because I like to take my time to reflect, but I truly took my time with the 2015 Brunello vintage tasted at the beginning of January, because the rave reports of yet another vintage of the century from some quarters were not unanimously confirmed in my tasting of the wines.

Once again, the vintage is considered outstanding and was, yet again, awarded five out of five stars. This is not an entirely unexpected assessment as it comes from the Consorzio of Brunello, which, understandably, would be reluctant to say anything else. To be fair: their assessment is not merely subjective. During the growing cycle the development of the grapes is closely monitored in several locations within the denomination, and the accumulation of sugar levels, acidity and dry extract continuously monitored. Something that looks good on paper, however, doesn’t necessarily follow through in the bottle.

As I tasted I was unaware of 2015’s supposed splendour, which follows the dramatically cold and wet 2014, a vintage that was viewed as a traumatic experience throughout most of the peninsula. I wonder whether that trauma has led to an unrealistically high level of enthusiasm for the vintage that followed.

Compared with 2014, 2015 was a walk in the park. A rainy and mild winter preceding the 2015 growing cycle initially raised fears that the dormancy period would not be long enough. The following spring was regular and with regular fruit set, but the hot period from the end of June to mid August resulted in small bunches, leading in the Langhe especially to such a large crop that a drastic green harvest at the very last moment was needed for producers to remain within the maximum yield decreed by law.

July 2015 was one of the hottest and driest on record in Italy and just when it seemed that the hydric stress would be too much for the vines, exactly on Ferragosto, the 15 August national holiday in Italy, some rain fell, which alleviated the situation. The harvest at the end of September and beginning of October was considered normal and producers brought in small, very healthy bunches.

Based on what I had heard and what I had tasted from cask in the last four years, I expected rather rich and fruit-driven wines, which is not exactly my preferred style, but one should always be aware of one’s own preferences and not assess a wine for what it isn’t but rather for what it is.

I pushed the idea of a rich, mature and easy-drinking vintage to the back of my mind, helped by a visit to Conte Costanti on my first day in Montalcino before I started the blind tasting of the 2015 Brunellos. Andrea Costanti, owner of this top estate just outside Montalcino (pictured above), is not a man given easily to hyperbole, but the 2015 got him raving, saying it was perhaps the best vintage he had ever made. His words echoed those of Iacopo Biondi-Santi, who last year allowed me to taste their 2015 from cask on the condition I would not write a tasting note.

Costanti told me that he aims to make wines that are ready to be drunk from the moment they are released but also possess the capacity to age, something he described as the ‘quadratura del cerchio’, or squaring the circle. Doubtful that this is possible, he nevertheless claimed that this is exactly what 2015 has achieved. His gorgeous, pure, lifted and concentrated Brunello is nothing less than sensational and this set the tone for my expectations for the blind tasting to follow.

But it turned out my expectations where only halfway met: quite a few wines are enormously accessible with rich fruit, albeit with plenty of Sangiovese’s tangy acidity. While in general there is lots of concentration, only in very few cases did I notice cooked or singed fruit flavours, which was much more prominent in vintages from the past, and I applaud Brunello producers for managing this.

But I wrote too many times for my liking ‘ready now’, and I remain very much in doubt whether 2015 has squared the circle. However, I don’t think impatient wine lovers and restaurateurs who are unable to age the wines until they are at their peak will care. ‘Seductive’ is a word that sums up many of the 2015 Brunellos, while the occasional overachievers are so good they deserve the label ‘memorable’. After the 2014 vintage, which, with reservations, I liked, 2015 is a godsend. While the former has proved a hard sell because of its poor reputation, 2015 is what the market has been waiting for and I expect it will be a commercial success.

But there is a risk. While the market will be quick to take up this vintage, a potentially superior 2016 is on its heels. A small 2017, from a particularly hot vintage with, I expect, variable quality, comes next, followed by a good 2018 and a possibly outstanding 2019, only just put in cask. I wonder if the market, already aware of this, will pick and choose and sit out one or several vintages. There is such a thing as ‘too much of a good thing’.

How long to age?

Four mornings of blind tastings were followed by visits in the afternoon to unanimously enthusiastic producers, many insisting it was one of the best vintages ever. As my tasting notes did not consistently confirm this, I kept on wondering why. All that exuberant fruit and wines that are ready from their release, seem not to promise longevity. Perhaps it is not needed. But to me Brunello is a wine that needs age to truly show its hidden depth. Quite a few wines would have benefited from less ageing prior to release, now a mandatory and formidable five years in total with two obligatory in cask. Any less would automatically declassify the wine to Rosso di Montalcino, with a much lower price tag. I do feel that these five years need to be reduced, but I am not holding my breath.

Those ageing requirements also seem to put a brake on more innovative approaches, such as using amphorae or concrete eggs which can all result in more transparent wines. Many producers, however, are unwilling to break out of the mould because of the mandatory ageing in wood, and also because of a reluctance, often erroneous, to change what they see as a winning formula. That in turn leads to a reluctance to embrace experimentation and change. 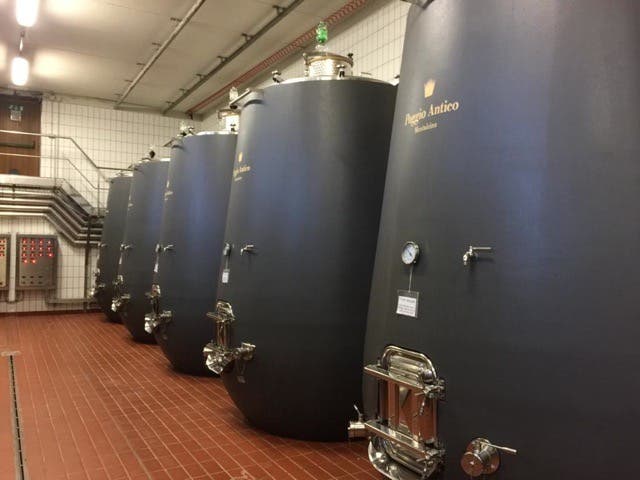 That change is unstoppable though, with several producers, notably Poggio Antico, turning away from stainless steel and now fermenting and partially ageing their wines in tulip-shaped concrete tanks (above). Tassi, a producer that until now has remained under the radar, is the most radical so far, fermenting his wines in amphorae and leaving them for over 40 days on the skins (Tassi’s amphorae are pictured below). The result, which looks more than promising, will be  bottled as IGT Toscana or Rosso di Montalcino, a sacrifice he is willing to make to show a whole different side of Brunello. 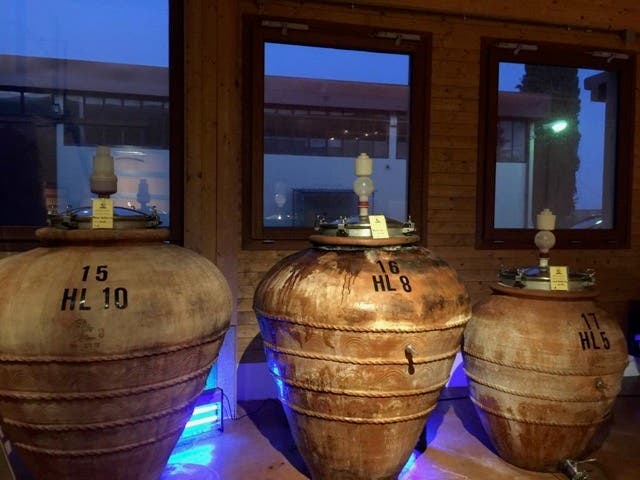 Too perfect for complexity?

While the 2015 vintage overall has produced good wines, they do not in every case show enough complexity to justify the lofty Brunello price tag. When I was talking about this to Susanna Padelletti, whose 2015 is one of the best wines of this vintage, she pointed out to me in her quiet way that perhaps 2015 was too perfect, too easy. According to her, when the vines are not struggling enough, it may result in less complex wines.

That observation was repeated by Marino Colleoni, who runs the tiny Sante Marie estate right below the walls of Montalcino. ‘2015 was too perfect. I didn’t need to do anything. I painted the cellar because I had time’, is how he described a vintage in which producers could simply pick the harvest date without any danger of approaching autumn rains. ‘A vineyard that has produced fantastic grapes will not automatically lead to great wines’, he explained. Colleoni told me that in 2015 and for the first time the wines struggled to convert all the sugars into alcohol and some residual sugar remained. He believes that the vineyard wasn’t able to bring more powerful yeasts into the cellar because the grapes were simply too perfect.

Referring to Professor Luigi Moio, who teaches oenology at the University of Naples, Colleoni explained further that in 2015 the grapes were without blemishes on the skins. Not even the common fruit fly had been able to attack them, which normally leads to puncture and micro-oxidation in the grapes. Normally the tiny quantity of juice that is released in the process provides nutrition for the yeasts and bacteria, which in turn adds complexity in the fermentation vat. I mentioned to him that I noticed quite a bit of new oak flavour in several wines. According to him the region’s producers no longer have any great enthusiasm for new oak and he believes that in those cases the wine was less able to absorb whatever new oak was used.

I don’t want to spoil anyone’s party, but while the 2015s received a host of 100 scores in the international press, I think only a few warrant such enthusiasm. You do get your money’s worth though with the 2015 Brunellos, especially if you do not want to wait for them. I, however, am putting my money on the 2016s.